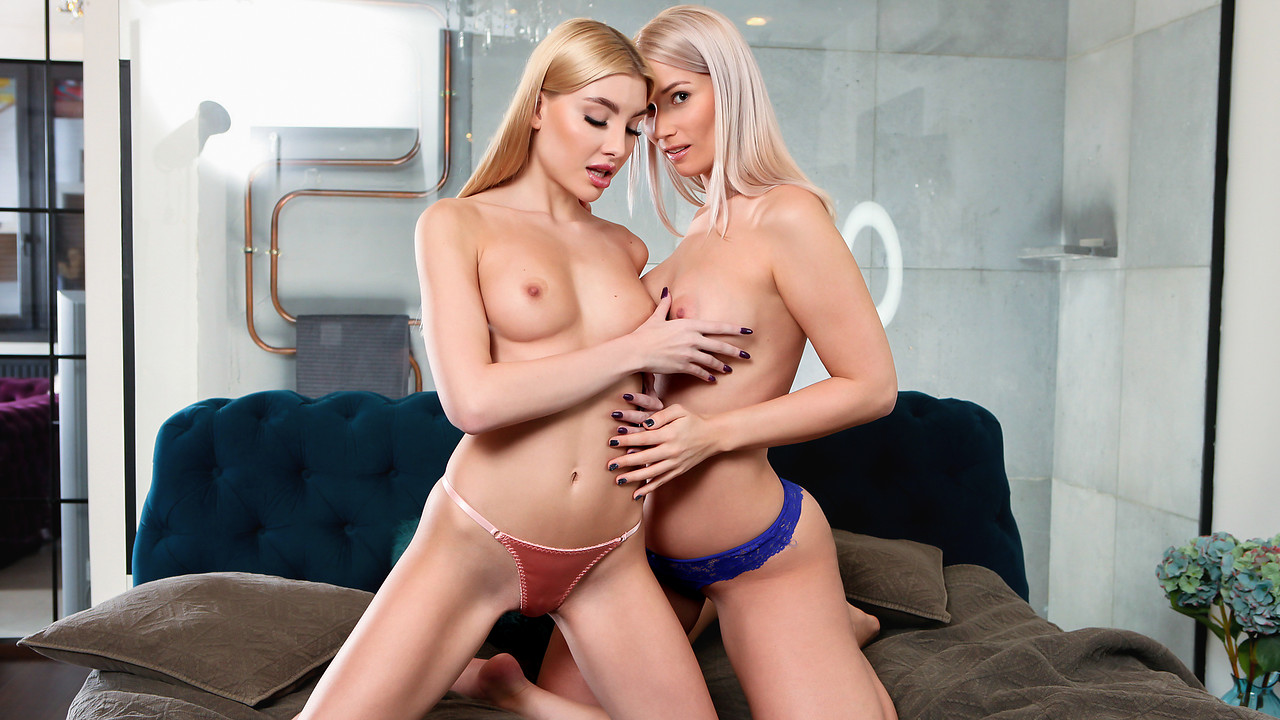 Sharon White and Silvia Buntarka are cam girling it up. They’ve discovered that the more is the merrier when it comes to getting views. Dressed in lingerie bras and thongs, the girls start the camera rolling and begin their show. From licking each other’s tits to eating each other out, there’s nothing left on the table for their viewers.

Sharon has just dived face first into Silvia’s pussy when Silvia’s boyfriend, Thomas Stone, arrives. He sees what’s happening and decides he wants to join on in. The girls are happy enough to have him! Silvia gets to enjoy Thomas’s tongue first as he rolls her onto her back and lays down on his belly between her thighs to eat her out. Knowing it’ll be her turn soon enough, Sharon is happy to cradle Silvia against her firm breasts as her friend gets brought to a moaning climax.

Thomas gets on his knees once he has left Silvia breathless, which puts his dick at the perfect height for the girls to play with. They’re eager to deliver, getting down and opening wide to lick along the length of Thomas’s shaft and suck him down nice and deep. The double BJ continues when Thomas lays down on his back so that his hardon can stand proudly above him.

Since Thomas is already prone, Silvia climbs back onto his dick and begins rocking her hips to ride him. Meanwhile, Sharon gets right up there on Thomas’s face so he can wrap his hands around her hips to squeeze her ass as he eats her. When Silvia slides off and puts her feet to work stroking Thomas’s hardon, Sharon quickly leans in to lick the tip for the camera to create a BJ and foot job at the same time.

Sharon finds herself on her back next. Spreading her thighs, she welcomes Thomas into her velvet glove with a low moan of delight. Silvia muffles that moan with a deep kiss, then climbs aboard Sharon’s tongue so that her friend can feast on her twat even as Thomas fucks her with long deep strokes. When Sharon flips onto her knees so Thomas can do her from behind, Silvia also adjusts her position onto her back so that Sharon can continue eating her out.

Silvia takes one last turn with Thomas’s fuck stick when Thomas gets on his back and pulls her on top of him. Sharon is there to help insert Thomas’s dick into Silvia’s snatch while Thomas and Silvia swap spit. From there, it’s a matter of each of them flexing their hips for the ultimate pleasure.