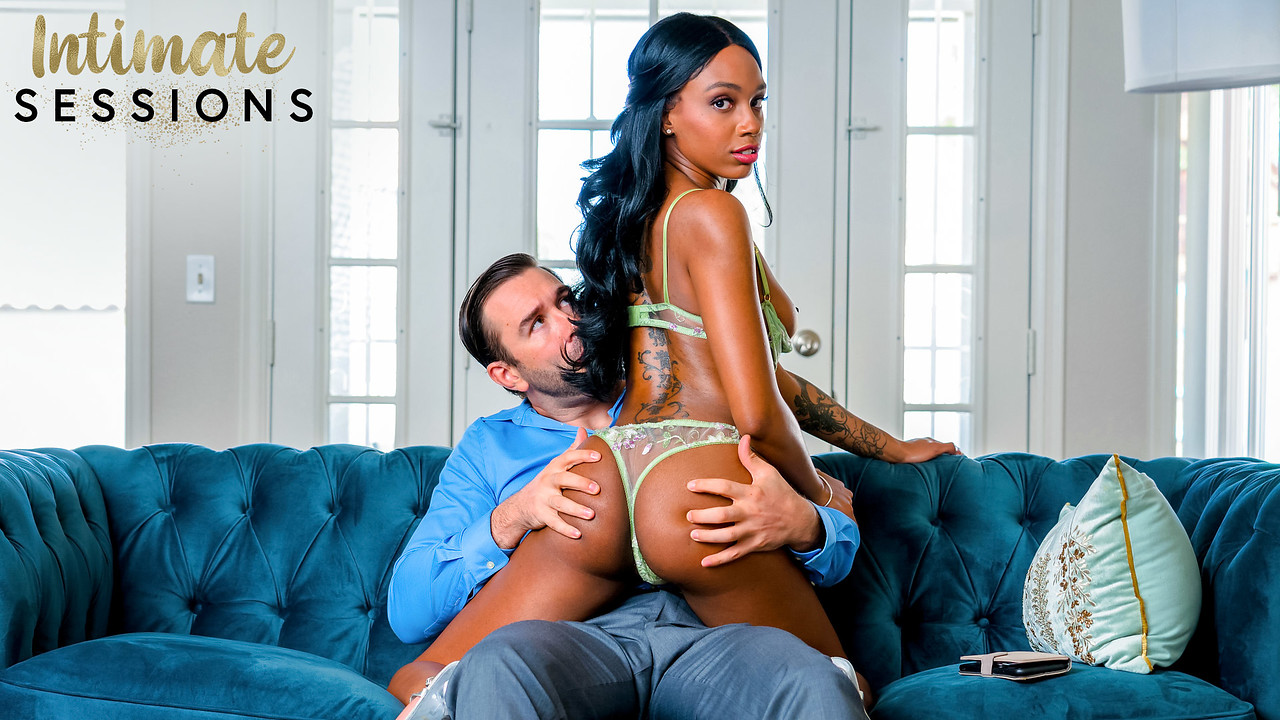 
Lacey London and
Will Pounder.

Will Pounder and his girlfriend Lacey London are about to be late for their dinner reservations. Sitting on the couch ready to go, Will calls out to Lacey that they need to hurry up. When Lacey struts out of the living room in sheer lingerie, though, Will can already sense that there’s going to be a change of plans.

Sure enough, Lacey crawls into Will’s lap so she can lock lips with him. Dropping to her knees, she rubs her hands over the evidence of Will’s arousal. Then Lacey gets to her feet and rubs down her titties while swaying her hips. When Will tries to get up, Lacey pushes him back down with her high heels. Now that he’s been put in his place, Will is obedient to his girlfriend’s whims.

Returning to Will’s lap fully naked, Lacey urges him to fill his hands with her soft breasts and to pinch her chocolate nipples. She gets on her knees in front of Will once again, this time to fill her hands and mouth with his lovely hardon. Her BJ is slow and sensual with plenty of attention paid to every inch of Will’s fuck stick from the head to his ball sack.

Unwilling to let Lacey have all the fun, Will eventually lays his girl down on her back once they have relocated to the bedroom. He settles between her thighs and dips his head to go to work with his talented tongue. While Will is exploring Lacey’s snatch with clever licks and fingerings, Lacey can’t help but squeeze and knead her own titties.

Their passion only grows as Will lays down in bed and pulls Lacey on top of him. She sinks down onto Will’s fuck stick and closes her eyes in delight as he fills her right up. Rocking back and forth, she enjoys some sensual thrusts before taking things to the next level. Turning around, she rubs her own clit and really goes for it as Will drives up into her coochie.

The couple tries some standing sex as Will comes into Lacey from behind while she lifts one leg and supports herself on the bed. Falling onto the bed so that she’s in a more traditional doggy position, Lacey keeps moaning long and loud as Will gives her everything she wants. She finds herself laying on her belly, Will’s hands on her ass as he keeps up the good work for both of them.

When Lacey rolls over onto her back, Will comes back into her as he captures her lips in a kiss. This time there’s purpose behind his deep thrusts. As soon as Lacey’s pussy walls begin quaking, Will pulls out to cover him in his huge pop. The couple spoons together in bed, both basking in the afterglow of a dinner well skipped.