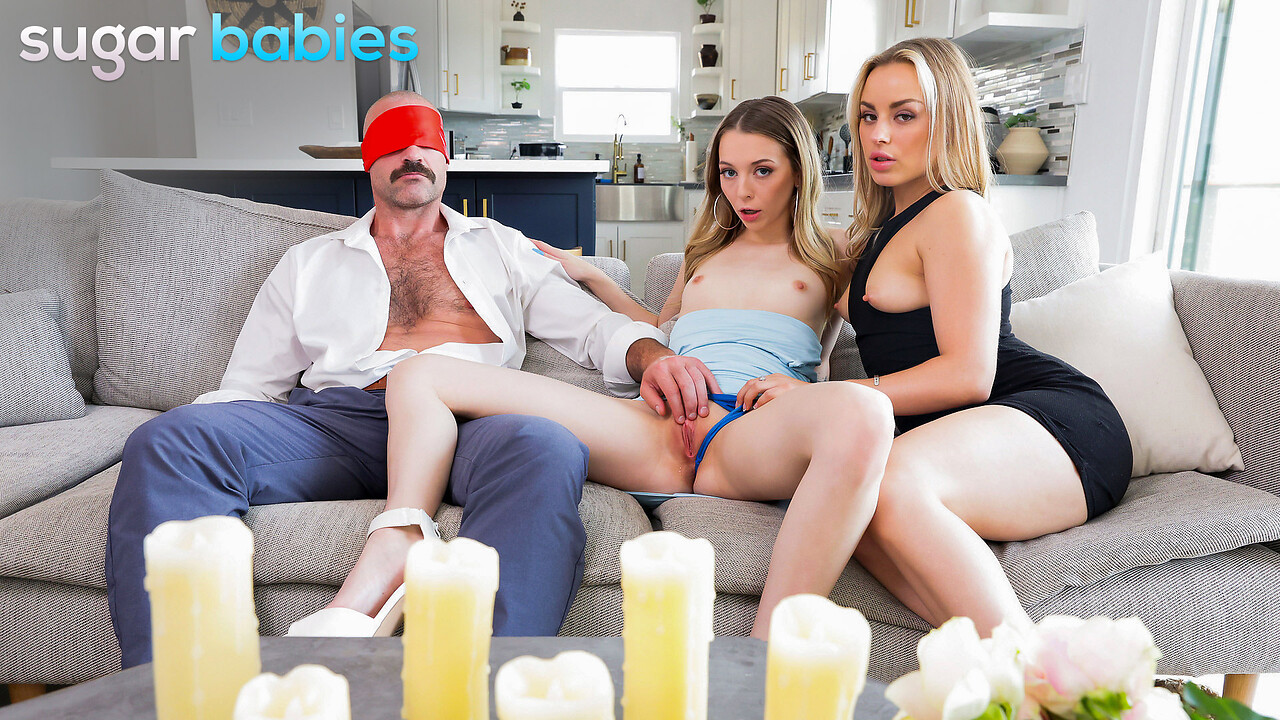 Lily Larimar and Anna Claire Clouds have a surprise in store for Anna’s sugar daddy Charles Dera. Charles arrives to find the scene laid out for a good time, complete with candles, flowers, and of course Anna ready to go. Lily is hiding behind the counter waiting for the right moment to come out.

Surprised but willing, Charles agrees to let Anna blindfold him. He claims he’d know his baby’s touch anywhere, so Anna beckons Lily over to put him to the test. The girls alternate between who’s touching and who’s not, although Anna does all the talking. When Charles begins to suspect something, Anna escalates by having Charles feel up Lily’s plump tits and dripping twat.

Lily continues her stiffie ride as Anna strips down out of her dress and thong. Rubbing her fingertips over her own slit, she waits for Charles to give her a hand. Eventually he does, making sure Anna is nice and wet to take over for Lily. When Lily cedes the cock to Anna, Anna climbs aboard in reverse cowgirl for a ride that really gets her moaning.

Switching things up, Lily lays down with her shoulders cradled on Anna’s lap and her thighs spread nice and wide. Charles runs his dick up and down Lily’s juicy slit to tease her for a hot moment, then slides on home. As Anna rubs Lilly’s clit, Charles fucks her until she explodes with pleasure that makes her pussy walls squeeze and quiver. Once Anna is assured of Lily’s delight, she climbs on top to have Lily eat her out as Charles continues to give her a proper pussy pounding.

On her hands and knees, Anna continues to put Charles’s endurance to the test as she takes him in doggy. Charles delivers, anchoring his hands on Anna’s waist as he drives home. Anna leans in to play with Lily’s twat and eat her friend out as Charles does her, but eventually she has to stop so she can just ride the wave of delight. Knowing he has played the perfect stud, Charles pulls out and blows his nut all over Anna’s back. Lily asks permission before lapping some of that big load up and sharing it with Anna in a deep kiss.