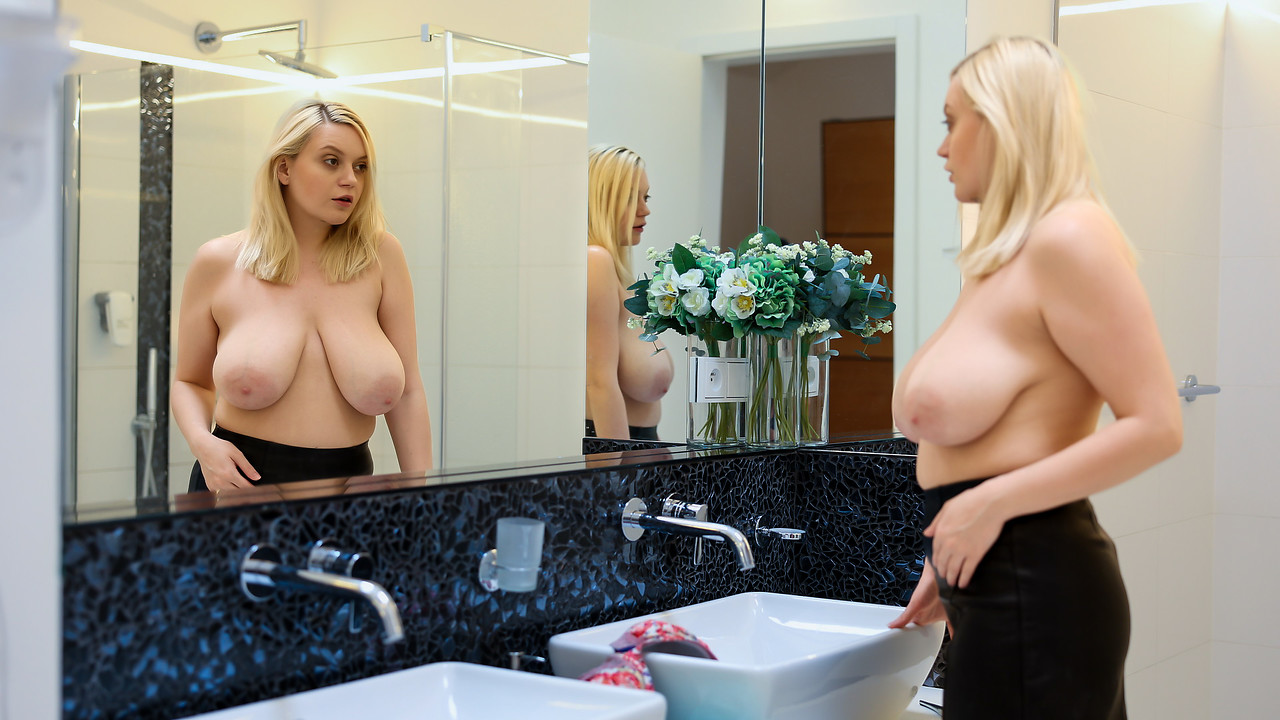 Lovely busty blonde Sandra Sweet knows she’s going to have a good time with her boyfriend Nick Ross tonight. She wants to be all ready for him, so she spends plenty of time in the shower. In addition to getting nice and clean, she goes ahead and plays with her big naturals, pinching her nipples and pressing them against the cool glass.

When Sandra is done hosing herself off, she dries off and goes about primping for her date. She hefts her tits into a bra, then slips into a cute outfit complete with a leather miniskirt. A touch of makeup and some high heels complete the ensemble.

Nick Ross is waiting for Sandra with a rose when she struts out of the bedroom. They waste no time getting intimately acquainted. Locking lips is only the beginning; before long, Nick has peeled Sandra out of her shirt so he can heft and motorboat her breasts. Popping her jugs out of her bra, Sandra releases Nick’s hardon from his jeans to stroke him in a sizzling warmup.

When Sandra drops to her knees, Nick is ready to receive whatever gift she’s about to give him. She begins with a titty fuck as Nick mirrors her movements with his thumb in her mouth. Then Sandra opens up so she can deep throat Nick’s fuckstick until her nose is practically kissing his pelvis.

Getting to her feet, Sandra lets Nick undo her miniskirt so that it puddles at her feet. She turns around supports herself on the table, then moans in pure delight as he shoves into her from behind. The position lets Nick’s hands roam Sandra’s buxom body as he flexes his hips for both of their pleasure. When Sandra rolls over and lifts one leg to rest against Nick’s shoulder, he takes her once again, nice and deep.

The couple relocates to the bedroom for another round of sexy fun. They start this part of their liaison off in doggy, with Sandra really enjoying the deep pussy pounding. When Nick gets on his back, Sandra climbs aboard to take on his hardon in a reverse cowgirl stiffie ride.